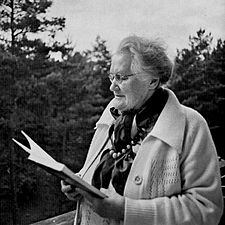 The wisdom of life

This story is not only about my beloved grandmother Aina, but also a story about never-ending love of humanity, courage, perseverance and wilfulness; also the story about how human being can achieve the seemingly impossible – passing through thorns and immeasurable difficulties, with the help of hard work.

Aina Muceniece, a Latvian scientist, founder of practical cancer virotherapy, the inventor of medicine Rigvir, was born on March 23, 1924 in Rumbula, Riga, in a small fisherman’s house on the riverbanks of Daugava. Her ancestors last name was Stinkulis.

Stinkulis family belonged to Livs – the ancient nation, whose roots go back into the history of 5000 years, once inhabiting the territory of nowadays Latvia. They were a belligerent and a brave nation, which largely led to its disappearance and subsequent assimilation by the Latvians. The last blow for this nation was not the war, but the plague that devastated Europe and Latvia in the 18th century.

Today there are less than 300 people in the world who call themselves Livs, and even less who can speak the language. The most famous internationally among the Livs is the scientist Ivars Kalvins, the author of the well-known drug Mildronat, who also contributed to the development of scientific achievements of Aina Muceniece.

Aina Muceniece is from a working-family; when her childhood was over she was working hard as well and experienced the poverty and hunger. As she once said: all this set her foot on the path of life.

Her life turned upside down on June 27, 1941 when 17-year-old Aina went to the summer training at the Institute of Economics in Riga, and a German invasion began and was followed by a mobilization of people for the war; Aina returned home only a few years later…

The soldiers hung a Red Cross bag and a rifle on her neck, and sent her by train to Russia and further to Bashkortostan to train her to be a nurse in Tirlyan, and then sent to a military hospital in Yaroslavl to look after wounded Soviet soldiers.

She experienced hard times in her young age, but (still fragile in the heart) Aina with horror remembers the first year spent in a military hospital: “..we were on duty for 48 hours, the moments, when you are completely fatigue, but should not stop because of the groans of injured soldiers – they screamed for mom, about their fear of death, despair – lot of indescribable screams of pain; when the arms and legs of soldiers were amputated – all without any anaesthesia, with an ordinary saw … and nurses got all this in large bowls.. so much of everything, but so little time – often bowls were thrown right outside the door into the snow …”

Aina Muceniece could not forget about this never in her life; even being an old lady she told her grandchildren that from that tremendous trauma she had forgotten where she came from and what her parents (mom) name was, even on the letters she wrote “For grandmother in Rumbula”.

The tension was so strong that Aina once could not endure it physically and mentally – it became unbearably excruciating, and she grabbed her belt and went to a nearby forest to commit suicide… In her memories she remembers this moment so clearly – “.. I walked through the forest, there was a birch grove, it was so peaceful and quiet, and then once the winds and branches twitched on the tops of the birch, and the familiar sound of childhood, the sound of Latvia, sounded. At that moment everything became clear to me, I remembered my mother, these were strong emotions, and at that moment I realized that I want to meet this sound again, come home to Latvia, hug my mom..”

It was a turning point; Aina Muceniece no longer faced such a difficult decision during her life. After the war, it turned out that the letters to the grandmother reached the addressee. As Muceniece writes in her autobiography, “The Way of Life is Subordinated to Fate and Will”: “..I arrived in Riga on December 31, 1944 and passed through Daugava to Tornakalns, past Victory Square, past Arcadia Park in a small one-room apartment opposite Riga Children’s Hospital where my mother had settled in her sister’s, my aunt’s apartment. My aunt was taken from the Salaspils concentration camp to the Ravensbrück camp in Germany. “I’m here, mom!” And when I write this today, the indescribable happiness of this episode of my life flows. I’m home again. Hunger, cold began again, because my mother was unemployed in the post-war period.”

Already during the war, when hunger and misery was all around, Aina found the strength to begin medical training at the Medical Institute of Moscow which was evacuated to Ufa and continued her studies at the Faculty of Medicine of the University of Latvia later at the end of the war. Immediately after the war, she began her career in medicine and science at the Institute of Microbiology, where she later founded the world’s first virology laboratory.

At the age of 16 Muceniece wrote a poem “For the Girl”, which illustrates the feelings of that time and explains the young person’s determination to overcome all difficulties. The poem has become one of Aina Muceniece’s guiding stars and a source of inspiration throughout her life:

Take control of yourself, girl.
Do not allow yourself to be humiliated.
You have to be proud,
You can’t bend
Never seek false happiness.
Fight, you shouldn’t stop to fight!
Lies should not tempt you.
Everything else should be nothing to you
Let only the work be a real pleasure for you.
Yes, work for you, girl, always is holy
You must not be afraid of work.
Your future will grow with your work,
You have to climb to the mountain, to the top!

During her life, Aina Muceniece maintained the Liv’s folk wisdom but never called it a religion. It consisted of God and deities, nature and labor.

Aina Muceniece and the Livs as well understood higher cosmic power and communicated with that through the deities – there were The Forest Mother, The Sea Father, The Mother of the Wind, etc.

Aina Muceniece remembers calling The Mother of the Wind at that terrible year in the forest, when she heard the wind on treetops. Bad energy could be brought back to a river by throwing a stone or a tree branch, but good energy could be gained from the sea.

Aina Muceniece often walked by the sea and during such walks she realized many new ideas and quotes. If you just wish to talk to God, you could do it in the forest, and Muceniece did it often during long walks or mushroom picking in the autumn.

The Livs did not have a church, instead of church was nature and sanctuaries – oaks, stones, springs, caves. The Livs did not bow and deify The God, but they dignified him and, if there was a success, they gave thanks with various gifts of nature.

The work was and remains important in the life of Aina Muceniece, as well as in the life of the Livs. Often the work was as a religion, and working place – like a church. Aina Muceniece also considered as important the earthwork – her church was not only the forest, but also the garden where she planted and dug potatoes and carrots until she became an old lady. Helping and treating her patients Aina Muceniece also taught them the Liv’s way of life – to be closer to nature and to work, to move in the fresh air and eat healthy the nature’s gifts.

Aina Muceniece always reminded her peers, children and grandchildren – live in such a way that wouldn’t make you ashamed to look yourself in the eyes.

At the heart of her success, Muceniece always noted special people of her fate, her love to work, the difficulties that she faced and conquered and that made her harder and gave her spite, like in ancient times, when people used to break stumps and plow fields to harvest and survive, no matter what.

On the morning when Latvia regained its independence, when significant pikes was reached in the science through many difficulties, including created unique antitumor drugs and helped thousands of cancer patients, Muceniece created another significant poem dedicated to science:

Aina Muceniece passed away on February 14th, 2010; in accordance with Liv’s traditions, she was cremated and buried near her family home Stinkuli, at Rumbula, in the Kapsils cemetery on the banks of the Daugava River, and rests in peace there together with her husband, journalist Rolands Mucenieks.

Aina Muceniece’s lifelong work – the oncolytic virus Rigvir continues to live and help cancer patients around the world, making eternal the love for humanity of the noble scientist.

*The autor of this article is Muceniece’s grandson 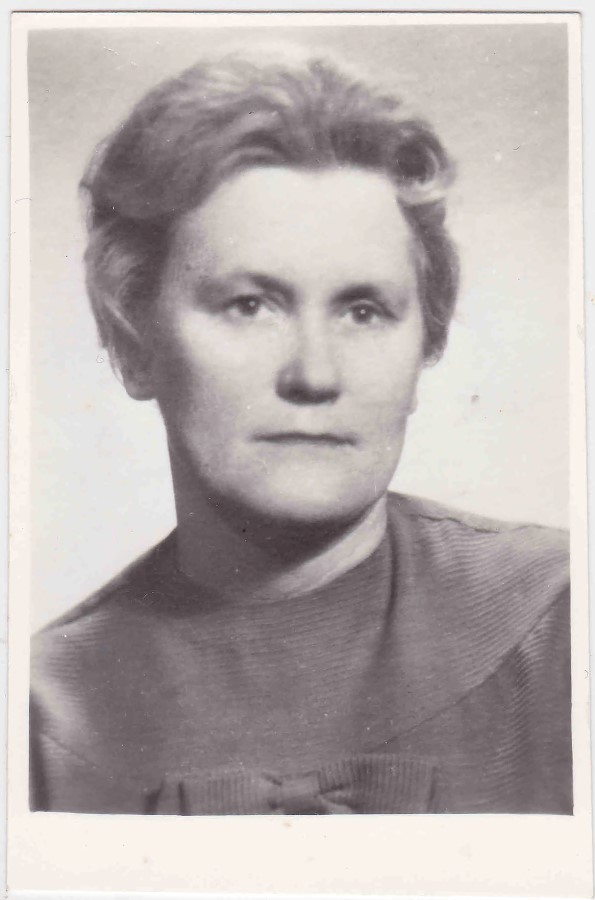